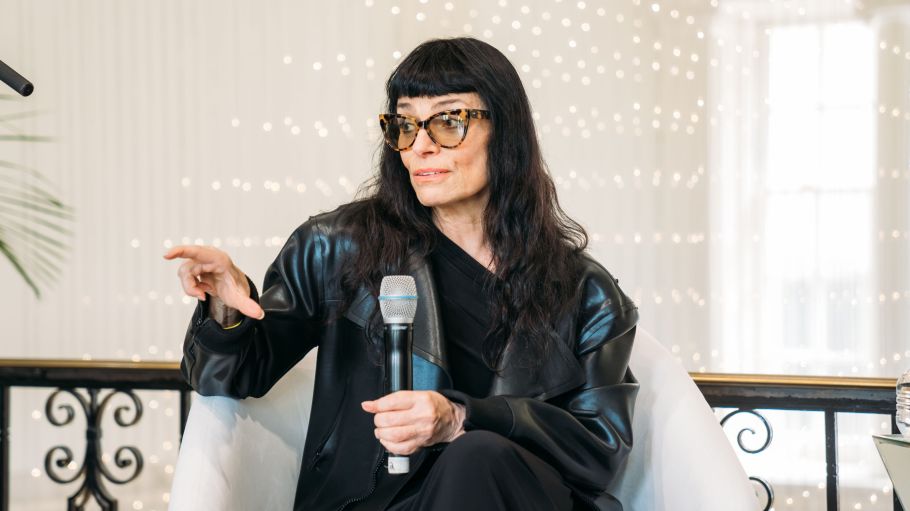 Norma Kamali, a native New Yorker who built her more than 50-year-old company in the city, was honored Wednesday with the City of Design Award from the Museum of the City of New York at its spring symposium and luncheon.

As women approached Kamali during the Champagne reception to sign copies of her book “I Am Invincible,” several in the crowd, including Kamali herself, were wearing the designer’s Diana dress. That dress, which is is a one-shouldered dress with shirred sides and an asymmetrical hem, was worn by Carrie Bradshaw in “And Just Like That” and has been selling strongly.

During the event, which was attended by 150 people, Kamali had a conversation with Sarah Brown, executive director of the Violet Lab at Violet Grey and Vogue contributing editor, who collaborated with Kamali on her book. They discussed Kamali’s New York upbringing and her thoughts about what the city needs to do recover from the pandemic.

Kamali, who opened her namesake company in 1969, is best known for such items as the sleeping bag coat, her swimwear and sweat collection, as well as more recently, the aforementioned Diana dress.

“So many of you look so amazing in my clothes,” said Kamali. “It’s probably the best compliment a designer can have, and I’ve been complimented many times today, so I appreciate it.”

Kamali said writing her book, which details how to maintain a healthy lifestyle at any age, was so personal and she was so happy to have worked closely with Brown during the pandemic and frequently on Zoom.

New York has always been the backdrop to Kamali’s story.

“I’m so proud to be a New Yorker, and I’m so proud to have a New York accent. There are times when I purposely dig up my street accent,” said Kamali, who grew up in the 1950s in the Irish Yorkville section of Manhattan. “I loved the culture of having people take care of each other.” There would be costume parties in their neighborhood, and volunteers would come to the East Side House. People from Broadway would create shows for them and they would learn how to sing and dance. Her mother would make the costumes for the performances. She said her mother didn’t have the opportunity to run a business, but “her power was overwhelming.”

“She dominated at these events because of how beautiful the clothes were that she created for everyone,” said Kamali, noting that her mother also did the hairstyling, haircuts and would take photographs and make paintings from them. Her father died when she was a child.

“Between New York and my mother, I knew this was the kind of life I was comfortable with,” said Kamali.

Calling her a “fashion oracle,” Brown asked Kamali to be a “New York oracle” and tell the audience where she sees New York going and what changes she’s seeing that she’s excited about?

“We all love this city, and now is the time when we have to love it more, more than we ever did. I remember the ’70s and everybody left, it was a very sad and difficult time. I remember what also happened creatively in the city. People who couldn’t afford to come to New York, all of a sudden, if you were brave enough you could find an apartment for a really good price, and you could probably find a building for a really good price,” said Kamali.

“There was a creative influx in the ’70s, which is why the ’70s are so special and things just originated here in a way they hadn’t in a very long time. A lot of very creative people and creative friends of mine became part of the culture of the city.…Even Studio 54 was this event that happened only because of what New York was going through and transitioning through. Fast-forward, New York has just survived a pandemic…,” said Kamali.

So what do we do now?

“We pray for our mayor. And I think it’s time for all of us to individually look at what we are anxious about. And find ways of solving the problem, volunteering, even if it’s just in your neighborhood or your schools. I think the schools need so much help and so much love. And we have to check our children. Our children in the public schools desperately need us. We need to use whatever we can to get the city in a powerful place. I do feel when there are times like this, we do become more creative, and we do become more clever about how we’re living and what we’re doing. I’m afraid for New York and I’ll never abandon New York, and we can’t. We have to stay and we have to fight to make it healthy and strong again.”

“I can be really tough on them and demanding excellence from them, which is not really happening in this world, but they love to have excellence demanded from them,” she said. “I’m really looking forward to the next school year. If I could redesign the school system, I already have the plan.”

Kamali was asked what inspires her now. During COVID-19, she said every day she was on Zoom with her team, planning the business and her e-commerce site. But then everyone was staying home and not shopping so she made pajamas. Before COVID-19, nobody was able to ship and her friend in China opened her factory for her and got the clothing made and also shipped masks. “We convinced most of our accounts to buy it. We had the only clothes out there on e-commerce, and everything sold out. Then we were on a roll. We’re a better company today and a stronger company today.”

She sold a lot of swimwear during COVID-19. After so many weddings were canceled and rescheduled, she quickly started selling dresses. She pointed to the Diana dress, which she did in the ’70s and ’80s. Five years ago she put it on the line again and put a bodysuit in it, and it started selling again. It was selling so much through COVID-19, there were thousands of people wanting to have the dress and they wanted it in many colors. Just when they finally shipped it all, Sarah Jessica Parker decided to wear it on “And Just Like That.”

“And I was like, ‘nooo,’ we then had another rush. We sold so much. It’s a dress that’s more about comfort and you can wash it,” said Kamali.

“Dresses are now. I feel there’s going to be a switch and I’m already doing a collection which we’ll photograph next week,” and she’s incorporating what she feels will be next, but was not ready to talk about it yet.

Finally, Kamali was asked how she feels about social media.

“I think social media is a gift of Millennials. Millennials don’t like to work hard, so they figured out a way not to do it, and they’re very clever,” she said. “For the first time in 55 years, I’m seeing women all around the world wearing my clothes. They’re taking pictures of themselves and hash-tagging, NKMyWay, and I’m seeing amazing photographs of women of all sizes, shapes and colors looking unbelievable, and it’s so fantastic. I used to stalk people on the street [wearing my clothes]. Now they’re sending pictures to me, and I’m seeing them on social media and it’s thrilling.”

Personally, she said she has a difficult time with social media because she likes to keep her personal life private. But because she feels the information in her book is important to share, she knows it’s more important than her personal feelings of having her picture taken. “I will exercise on Instagram. I’ll do these things to say you can do it, too. I’m 76 — if I can do a split, you can do it, too.”